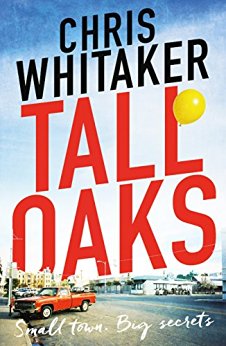 Three-year-old Harry Monroe is missing, snatched from his bed while his mother, Jess – heartbroken and crumbling, having recently been abandoned by her husband – lay sleepless upstairs. This, in a fraught, deliciously creepy opening chapter, introduces us to the small-town Americana of Tall Oaks: a place of sunny smiles and white picket fences straight out of a Norman Rockwell painting, but where if you scratch the surface there are terrible things to be found. And Chris Whitaker scratches, all right. All, as the saying goes, is not as it seems.

Let’s get it out of the way: Tall Oaks is an extraordinary debut. A novel a seasoned, ‘big name’ author would be proud to have produced. The writing is carefully-crafted and assured, with not a word wasted. It provides depth and life, light and shade, to the characters and the town itself, both of which are skilfully drawn by Whitaker – Tall Oaks and its inhabitants live and breathe inside the covers of this novel, and it was a wrench to leave the place behind. This is the true test of a good book – do the characters stay with you long after the last page has been read, do you want to spend more time with them and find out what they are doing? Tall Oaks achieves this, and then some.

The novel’s diverse set of characters – from the aforementioned Jess, hurtling towards the brink, to the taciturn, damaged police chief Jim Young, to the laugh-out-loud and awfully, thrillingly profane Manny – provide richness to support the propulsive narrative, and Whitaker achieves a delicate balance (no mean feat) of the comedic and the suspenseful. It is shot through with a wonderful sense of humour, but there is darkness and profound sadness here too, often tugging at the coat-tails of the myriad jokes and funny scenes that pepper the pages. We do not forget what horror brought us to Tall Oaks, and the fate of Harry Monroe is never far from our thoughts – especially as we build towards a climax that is as moving as it is shocking.

Tall Oaks has invited favourable comparisons to ‘Fargo’ or ‘Twin Peaks’ – there are tonal echoes of ‘Blue Velvet’ and ‘Blood Simple’ in the mix, too, as well as Hitchcock’s ‘Shadow of a Doubt’ – and these are well deserved, but should not divert attention from what Whitaker has achieved here. While nodding to these classics, he has crafted something special and of itself. This is no mere homage or photocopy of a photocopy of a neo-noir tale. It is a fantastic story in its own right, told with skill and verve, with deft plotting, and with a cast that cries out for a film adaptation or returning television series, such is the fullness of their backstories and the possibilities of where they could go in future.

The cover blurb for the novel states You’ll have to look twice at Tall Oaks. This is one of the best books I’ve read in a long old time, and I can imagine people returning to the place again and again.