Reblog: Kill The Next One by Frederico Axat – Reviewed by Little Bookness Lane 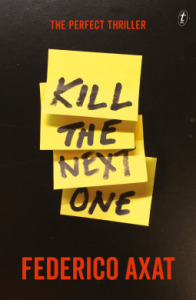 The second I spied the book summary for this one I knew I had to read it. The premise is ingenious by itself, yet Kill The Next One goes beyond the dominion of ordinary psychological suspense to amuse itself with the twisted intellectual intricacies of Theodore ‘Ted’ McKay.

Ted is coming to terms with the thought of his inoperable brain tumour and has decided to take matters into his own hands and end his life. His family is away. Everything’s prepared. There’s nothing to stop him. Nothing, that is, until he is ‘saved’ by the doorbell.

This unexpected caller is insistent and Ted has no choice but to abandon his plans and open the door. A man called Justin Lynch invites himself in and Ted listens in intently as he explains the reason for his visit: people who…