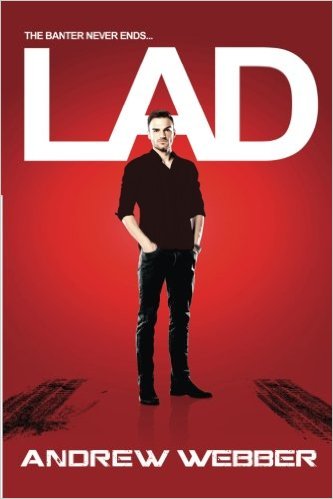 Danny Small has it all: flash car, string of girls, nice pad and a job as an estate agent – which allows him to coin it in with his on-the-side property sale fiddles. It’s all boys’ trips to Marbella and banter-filled booze sessions and acrobatic bedroom antics until stupid o’clock in the morning, washed away the next lunchtime by a few pints of Stella tinged with vodka. And then the merry-go-round starts again. And Danny is loving living it large. But slowly, it’s starting to unravel and his past is about to catch up with him…

With ‘Lad’, author Andrew Webber has pulled off the difficult feat of making a thoroughly unlikeable – to say the least – character wholly believable and fascinating to read about; think Detective Sergeant Bruce Robertson in Filth or Kill Your Friends’ Steven Stelfox. Danny is a man-child, a creature very much of another time who has failed – for reasons which become clear as the book progresses – to mature, and who is rapidly being left behind by friends, workmates and worried family. He is vulgar, crude yet occasionally witty (although not as witty as he thinks he is) and possesses a complete lack of self-awareness: where he thinks he’s an iconoclast, he’s actually a sad individual, a throwback to another era, one of Loaded and FHM and shouting lager-lager-lager while bedding as many women – who, of course, he mentally rates out of ten as soon as he meets them – as is humanly possible.

This is a car crash in action – you watch, wincing, rubbernecking with eyes almost squeezed shut, as Danny hurtles onwards, blissfully unaware of how his life is falling apart around him, and how he is treating the one woman who actually loves him unconditionally as a casual, easy-going ‘thing’ to be discarded for booze and betting Saturdays with the other ‘lads’. This is done with some considerable skill, and therein lies the tension of the book: Webber cleverly allows us to see it coming, and our ‘hero’ simply cannot, and despite him being a loathsome creature we feel for him, such is his utter inability to comprehend what his happening to him.

But it’s not all ‘birds and booze and bantz’, because there is an undercurrent of melancholy beneath the bawdy humour and often cringe-inducing incidents, as Webber hints at what has gone before, and the events that made Danny become the unreconstructed man he is today. These allusions are neatly and subtly woven into the narrative, and only towards the end of the novel – in a particularly moving chapter – do we learn the true extent of Danny’s previous problems – when, after so many pages of gawping at his uncouth behaviour, we finally understand why he is such a damaged individual who deserves our sympathy.

With ‘Lad’, Webber has crafted a terrific cautionary tale and an excoriating study of the culture, wrapped in a compelling, fast-paced read. The final chapters are hold-your-breath great, and you find yourself in the strange position of rooting for a person you should never be rooting for, hoping that at last things will come good, and Danny will turn his life around.