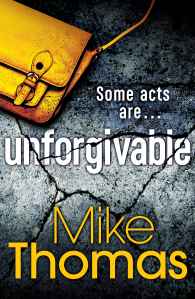 Today I’m very happy to welcome Mike Thomas, who rather rashly agreed to answer a few questions for me on Unforgivable and other things. A review follows as well (you should get this book it really is pretty darn good and available now!)

So let’s talk about Will MacReady. This is his second outing and you are no nicer to him this time than you were last time. Mean you crime writers are (that is my attempt at a bit of Yoda) So readers coming in have a bit of background – what was the inspiration behind Will and tell us a little bit about his journey before the beginning of Unforgivable.

Impressive Yoda, there. * channels Darth Vader* Most impressive. Where were we? Oh yes. Well first, the name – one of my fave horror films is John Carpenter’s ‘The Thing’, with Kurt Russell’s protagonist MacReady. I always wanted to use the name as a nod to the movie. And I’ve had the MacReady character in my head since the 90s, when TFI Friday used to be on the gogglebox and Chris Evans’ producer sidekick was called Will – remember when they all used to point at him and say ‘Wiiiiiiiiiiillllllll’? That’s how Will MacReady was named. How daft is that? Anyway, MacReady is basically me when I joined the job: a tad naïve, wants to make the world better, is slightly gung-ho but his heart is in the right place. Give him a few years he’ll be cynical, overweight, have a completely shaved noggin and an addiction to XL kebabs (with coleslaw) while working night shifts – again, just like me….